You are here: Home / TON PUEY 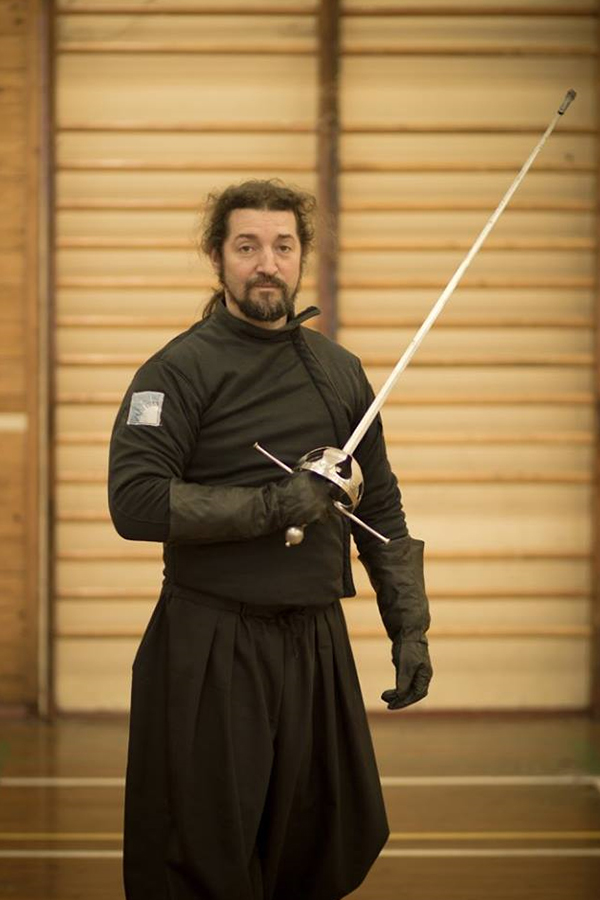 The period of splendor of the Verdadera Destreza system was the same as that of the Italian rapier schools, so both schools crossed at times. To deal with this situation, the fencers, They created different strategies. One of them is the famous ” Bella Española”, with the intention to annul the low positions of the Italians.

After practicing shotokai karate during his childhood and adolescence, he started practicing sports fencing in 1995, beginning in 2003 his path in historical fencing.
His interest in the sword drags him to the discovery of the school of the True Skill through the Spanish and Portuguese treaties of the sixteenth and seventeenth centuries, a discipline in which he decides to specialize.
He has been a founding member of the AGEA (Asociación Galega de Esgrima Antiga), honorary member of the FEEH (Spanish Federation of Historical Fencing), member of the editorial board and vice-president of AGEA editor (one of the longest and most regular publishers dedicated to the historical fencing and specialized in Iberian fencing) and member HEMAC (one of the first European associations of researchers and practitioners of European historical martial arts) In 2015 he is recognized as Mestre de Armas by HEMA Portugal and in 2018 as the first Non-Italian Historical Fencing Master by the Italaian Fencing Federation.
He is currently technical director and Master of Arms of his latest project, Academia da Espada, focused on the study of la Verdadera Destreza with the weapons of the moment of greatest splendor of the discipline, such as the rapier sword, alone or combined with dagger, buckler, shield or mantle and weapons of antler in addition to work in the interpretation of the rules of the amount of the sixteenth and seventeenth centuries and the study and interpretation of the other current fencing of the peninsula, especially the, so far , the , only treaty not belonging to the Verdadera Destreza preserved, the “Art of Fencing” by Domingo Luiz Godinho.
As a teacher, in addition to his usual work as an instructor in A Coruña, Galicia, he has taught seminars in France, Austria, Italy, Holland, Ireland, Greece, USA, Australia, Poland, Russia, Sweden, Portugal and Spain